Where are the Most Maple Trees in Vermont? | Happy Vermont Where are the Most Maple Trees in Vermont?
September 20, 2022
by Erica 5 Comments
1 Like
Share
Listen to the Podcast

If you’re wondering if there’s an epicenter of Vermont maple trees, look no further than rural Orange County. The county, home to the most maple trees in Vermont, is located east of the Green Mountains. The region includes Newbury, West Topsham, Vershire, Strafford, Thetford, Brookfield, Chelsea, Randolph, and Tunbridge.

One in every four trees in Vermont is a maple tree. Maple trees grow almost everywhere in Vermont, especially in Orange County. 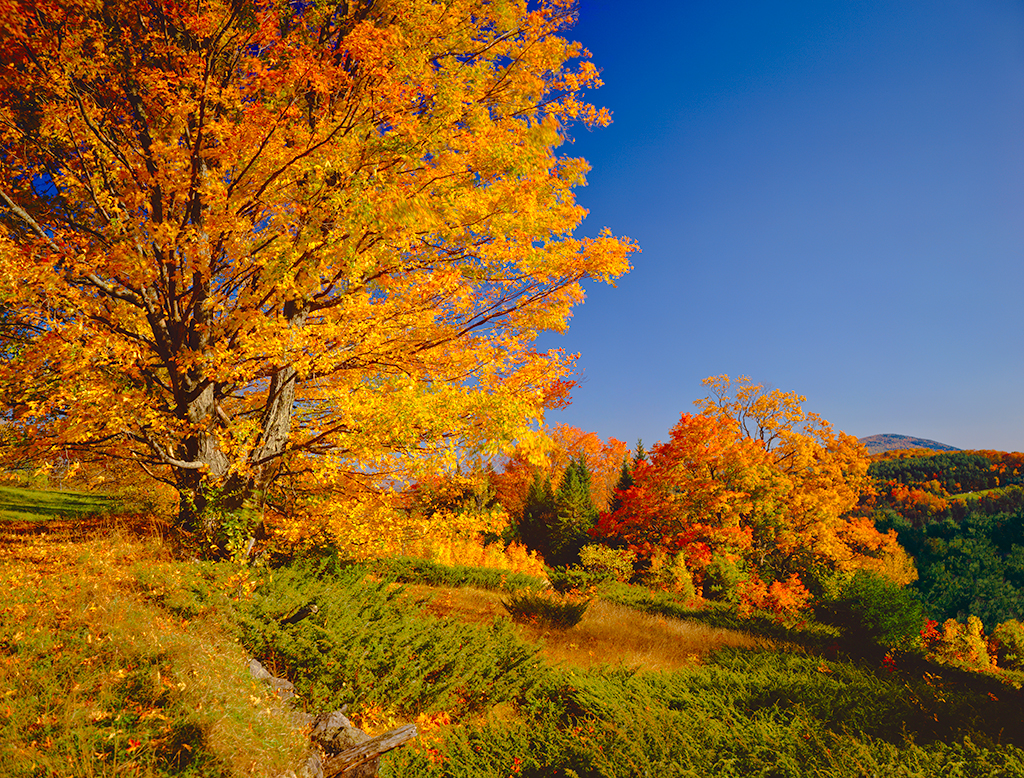 “I have to make reference to what you might call the ‘planetary epicenter’ of sugar maples, which is in Orange County, Vermont,” says Mike Snyder, Vermont Commissioner of Forests, Parks, and Recreation, in a Happy Vermont podcast interview. He explains that the geology of the Waits River drives much of the ecology in that particular area.

“Sugar maples happen there, and they happen in a glorious way,” Snyder adds. “They grow well, they do well, they’re healthy, and people have been taking good care of them there for a long time. It’s a really good place for sugar maples.” If you’re looking for the most maple trees in Vermont, head to Orange County for scenic drives, small-town charm, and outdoor recreation.

Finding the Most Maple Trees in Vermont: Route 25 from Orange to Bradford

If you want to get out into the woods, explore the Clement Loop Trail in Corinth. Afterward, head to the nearby Crossmolina Farm’s Cookeville Market, a four-season farm stand on Center Road.

Chelsea Mountain Road, located between East Randolph in Chelsea, climbs along hillsides, meadows, and deep woods. At the end of the road, take a right on Route 110 south to Tunbridge, where you’ll find covered bridges, the North Tunbridge General Store, and the Tunbridge Fairgrounds.

The fairgrounds hosts the Tunbridge Fair in September and Vermont Sheep and Wool Festival in October. Stone Road to the Floating Bridge in Brookfield

Nothing beats traveling along a Vermont dirt road in the county with the most maple trees. On Stone Road, you’ll go past wide-open fields and coast under a broad canopy of trees. You’ll find the Floating Bridge crossing scenic Sunset Lake in Brookfield.

After you drive, walk or bike over Vermont’s only floating bridge, head west on Route 65 to Allis State Park in Randolph (day use is permitted off-season). Climb the park’s fire tower to soak up sweeping views of the Green Mountains. -A view of the the Strafford Town House before the leaves turn.

The iconic Strafford Town Green alone will make you a lifetime fan of this Orange County community. The Town House, built in 1799, stands at the north end of the common between Brook Road and the Justin Memorial Highway. To the south is the Justin Morrill Homestead, a state historic site with public gardens, workshops, and events.

If you want to stretch your legs, explore Clover Wildlife Management Area, a 500-acre forested area open for hiking and wildlife viewing off Route 132. For a longer drive, take Route 132 east and continue to Thetford. Route 244 to Route 113 Between Fairlee and Thetford

From Route 5 in Fairlee, head west on Route 244 and wind around Lake Fairlee. Head south on Route 113 in Post Mills—home of the Vermontasaurus, created by the late Brian Boland—and to Thetford, a classic Vermont town.

Main Street in Newbury is listed on the National Register of Historic Places. It features everything you would want in a classic New England town—a general store, a town green, and easy access to outdoor recreation in the region with the most maple trees in Vermont. Along Route 5, you’ll find the Newbury Village Store, a 19th-century Methodist Church on the Town Green, and historic homes at every turn.

-Mike Snyder, Vermont Commissioner of Forests, Parks, and Recreation, in Corinth in 2020.

Happy Vermont Podcast: Fall Foliage, Where to Find the Most Maple Trees in Vermont, and the Future of Forests

In this episode of Happy Vermont, Vermont Commissioner of Forests, Parks, and Recreation Mike Snyder talks about this year’s fall foliage forecast. He also shares where to find the most maple trees in Vermont and what private ownership means for Vermont’s forests.

You can find Happy Vermont’s podcast on Spotify, Apple, iHeartRadio, Podbean, or wherever you listen to podcasts.

The Best of a Woodstock Fall Foliage Getaway